We are here: latest news from Middle East and North Africa 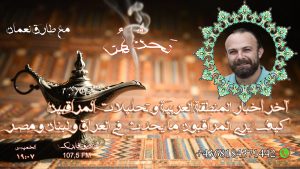 In today’s episode, we will be exploring the latest news in the Middle East and North Africa regions such as Egypt, Syria, Iraq, and Lebanon as they are in reality and not as described by targeted media.

What does the Arab street say about the killing of terrorist Abu Bakr al-Baghdadi?

What does the public opinion say in the Arab regions about the role of the European Union in their land?

Tareq Nouman, We are here