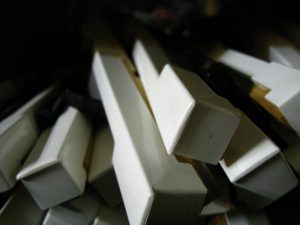 Sonntag, 24. November 2013 ab 18:00 Uhr: Classical Music – it’s not everyone’s favorite! Maybe a spoonful of handsome electronica and fine arranged glitches will convince you too. You like pianos? Then you will love this months episode: As a special surprise we’re presenting you a full version (almost 28 minutes) of Kashiwa Daisuke’s April#02. And at the end there will be some historical pieces again…

John Cage (September 5, 1912 – August 12, 1992) was an American composer, music theorist, writer and artist. A pioneer of indeterminacy in music, electroacoustic music, and non-standard use of musical instruments, Cage was one of the leading figures of the post-war avant-garde. Critics have lauded him as one of the most influential American composers of the 20th century. 1940 he had the idea of the Prepared Piano – a piano that has had its sound altered by placing objects (Preparations) between or on the strings or on the hammers or dampers – and wrote many compositions for that instrument.

Luigi Russolo (30 April, 1883 – 4 February, 1947) was an Italian Futurist painter and composer, and the author of the manifesto The Art of Noises (1913) in which he stated that the industrial revolution had given modern men a greater capacity to appreciate more complex sounds. Russolo found traditional melodic music confining and envisioned noise music as its future replacement. In the same year he invented the Intonarumori, noise-making machines and early predecessors of the first analog sythesizers. Today, 100 years later, Russolo became often regarded as one of the first experimental noise music composers.

Lexaunculpt – The Tuning of Miniature Modems